The Birds and the Bees

It's also something that's rarely spoken about. I mean ... the first time I had any type of "talk" with my mother was when I was nineteen. And EYE initiated it.

I did a small poll on Twitter, recently. Before you take a look, I'd like to make it known that I consider myself to be a part of Black Twitter, not Latino or Hispanic Twitter (if those are even things). Therefore, my results are not necessarily representative of the Latino population. Despite this, I think you might identify with the results. 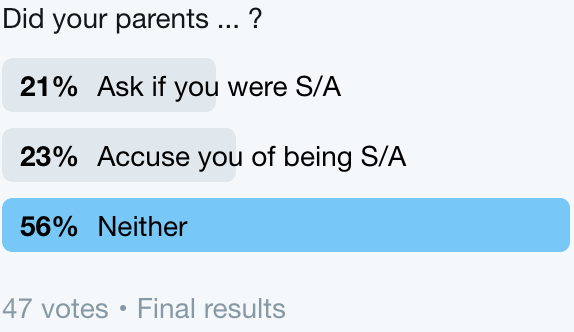 As you can see in the results, out of 71 votes, EIGHTY TWO PERCENT of voters did not have a relationship with their parents where they could speak freely about sex and intimacy, including whether or not they were active. The third question results show that out of 47 votes, 56% had parents who didn't even bother asking or accusing them of being sexually active. They just avoided the subject entirely. I feel like soooo many of us can relate to that, including me! My memories with my mother literally include, "No se lo de" (Don't give it to him), and "No se lo diste, verdad?" (You didn't give it to him, right?).

"It" being my virginity.

Virginity is something held in high regard by many people. It's "a treasure" you hold until someone takes it or you decide to give it away. Unfortunately, it's also turned into a synonym for worth and value, used to discourage young women with comments like, "No one will love you if you're not a virgin." The boys get none of these types of comments, though. Typical.

I was a virgin until marriage, and I believe in abstaining from sex until marriage, but ... looking back, there was a point in time where I realized that it was a good thing that I did, because I really wasn't ready. That point was probably sometime around 21 or 22 years old. How did I know I wasn't ready back then? Because between 22 and 23, I realized I was mentally and emotionally ready.

Either way. At the end of the day, YOU are responsible for your actions, not your parents. So YOU need to either take initiative and start talking, or educate yourself properly before choosing to engage in sexual activities. Younger ladies (and lads). If you can't outwardly talk about sex - whether it's with your parents, your doctor, or your partner - you shouldn't be having it. Point blank. That's my belief. And I knoooow ... parents have the tendency to think that asking questions or even talking about it means that you're engaging in sexual activities, which is obviously wrong.

Overall, I think that Caribbean, Hispanic, Latino, and West Indian parents need to get their lives together. Seriously. 'Cause the whole "not going to talk about sex or educate you in any way" thing benefits absolutely no one. It's actually horrible for everyone. Firstly, parents are going nuts wondering what you've seen, what you've heard, or what you've done (unless they literally don't care at all, because that does happen, unfortunately). Secondly, kids are out here "learning" from unrealistic media outlets, uneducated peers, and/or lovers who are truly uninterested in their well-being.

Approximately 49% of Latino teens have had sexual intercourse and roughly 35% are sexually active (The National Campaign to Prevent Teen and Unplanned Pregnancy, 2014). All of this aforementioned ignorance and lack of education results in (ta da!) lack of education, which can lead to things like: gynecologists visits not happening, contraceptives not being used, STIs being contracted, unplanned and unwanted pregnancies (that may or may not lead to abortion), self esteem issues, rushed marriages (and future divorces), unhealthy/unsatisfying sexual relationships, and hearts being broken.

Like, you would really rather allllllll that versus being open, objective, and willing to speak to your child/parent about something natural and beautiful? We're already at a disadvantage when it comes to socioeconomic status, sex education in schools, teen pregnancy rates, STI an HIV rates, access to [culturally competent & bilingual] health care providers, and health care coverage. Y'all really want to take that risk? Teens and young adults are doing what they want, at the end of the day. They need to be prepared, no matter what values they've been brought up with or what they ultimately decide to do.

I truly hope that our generation is more willing to take on this responsibility as parents and caregivers, INCLUDING the men. 'Cause honestly, some of our fathers have NO part in this process and dare to reprimand or punish harshly when things take an unexpected turn. Uh uh. You thought. Fathers have equal responsibility in raising and educating their children (including their daughters) in all aspects of life - from math, to menstruation, to sex. But that's another topic for another day.

I don't care if you're religious.

I don't care if it's culture.

Sex education is important and beneficial.

Don't be a detriment to your child (or yourself).

This World is Not for Us