As Spanish speaking Latinas, we tend to grow up with lots of conversation and bias surrounding our hair ... and others' hair. How it's bad (or good), how it needs a relaxer (or a brush), how it's fake (or too natural - *rolls eyes*).

Until around this year, I had never seen a Spanish speaking Latina (in MY real world) wearing a protective style such as box braids, feed in braids, or twists. Nor did I truly know anything about them until college. Me being a semi hair virgin (I only got highlights a couple years back for the first time), I've never done anything to my hair except cut it or get highlights done.

Growing up, I was kind of under the impression that we didn't do that kind of stuff, maybe "because we didn't need to" (insert racism ?). You know ... the whole, "we have good hair" thing. Clearly, I'm past that stage, and I know that protective styling has its purpose. But now, all these Hispanic Latinas are rocking the protective styles! Some, I'd like to educate and call out because

2. They don't consider themselves black

and I KNOW that they be the ones talkin all types of mess about "good" hair and black people, whether they're aware of their wrongdoings or not. Appropriation at its finest. But I digress ... this blog post is about ME.

So ... I've been wanting Senegalese twists for a while. Box braids really didn't speak to me, and I just felt like I'd look better in twists. My husband has plenty of friends who do hair, and since we were going down to Alabama, he took the opportunity to hit one of them up.

3. I don't like venturing into the unknown unless I've thought about it for a VERY longtime. (I thought about starting this blog for like ... over a year)

4. The first thing she asked was to send a pic with styles, size and length.

I'm over here stressing already because I have no idea what I'm doing, no one is my height, so I can't find a length that I think would look good, no one is my skin tone, and no one has my face shape! HELP!

In a perfect world, I just wanted to say, "Do what you think would look good," to someone who knew me and end up lookin like bae when it was all said and done. You know?

Another cause of stress. Ever since I stopped relaxing my hair in high school, my dandruff has been crazy. My scalp and product build up is something I'm very self conscious about, so it's another thing that held me back from taking this step. I don't want to pay nearly $200 for my scalp to acting a hot mess a few days after I've gotten my hair done!

Then there's the cost. I'm cheap. I'd rather spend $200 in a week on 5 days of lunch and dinner than in one shot for my hair. These things be costing MONEY (so I'm told), and I'm used to $40 wash and set, blow dry + flat iron hair appointments. Plus, since my husband had made this "his project", he wasn't telling me how much this would cost. No bueno.

Finally, there was that tiny amount of doubt that I would be looked at strangely by those who knew me. I know it's stupid, but I recently came to terms with my identity, never did this kind of thing, and didn't want to just seem to be following trends without knowing or appreciating where they've come from. I know that the black community has accepted me (for the most part, from what I can tell), but I know that some people might not feel the same as my husband or that friend, who tell me that I'd look dope and make no comment about me being Latina.

So, if you're reading this and you've never done a protective style, don't worry. You're not alone.

Protective styling gets its name because it protects your hair from manipulation from day to day for an extended period of time (the time you have your hairstyle in). The specific hairstyle I was hoping to achieve was Senegalese twists, which originated in Senegal (duh). For these, as well as many other styles, you must buy hair extensions. Now, I bought seven packs of black, synthetic Kanekalon ($4/pack at the local beauty store). per suggestion from the girl who was going to do my hair, because I have a lot of hair. I also bought some new edge control and hair jewels (because, why not).

Note: I was told that Senegalese twists would not last as long as box braids, which was perfectly fine with me, seeing that this was my first time getting any type of protective style, and I wasn't aiming for anything long term

To prep, I literally did not know what to do, so I just pre poo'd with one of my deep conditioners for about half an hour, then washed my hair in six sections, really trying to make sure my scalp wouldn't be an issue, later on. I moisturized my hair slightly with a hair milk, sealed with a mixture of oils, and put my hair in twists to sleep. When I woke up in the morning, I had a few hours before my appointment, so I stretched my hair with my Q-Redew handheld steamer and fixed my edges with Lottabody Edge Control.

We began the process at around 12:30pm, maybe a little later. It lasted about six hours, and it wasn't bad at all! She was super gentle with my hair, and the environment was casual, since we had already been acquainted prior to that day, and I felt comfortable asking questions throughout. After twisting, she sealed the ends with a lighter, dipped the hair in hot water, and trimmed.

And these were the results!

Note: We did not use all seven packs of hair, but I'd say it's better to buy too much (it's cheap enough, anyway). 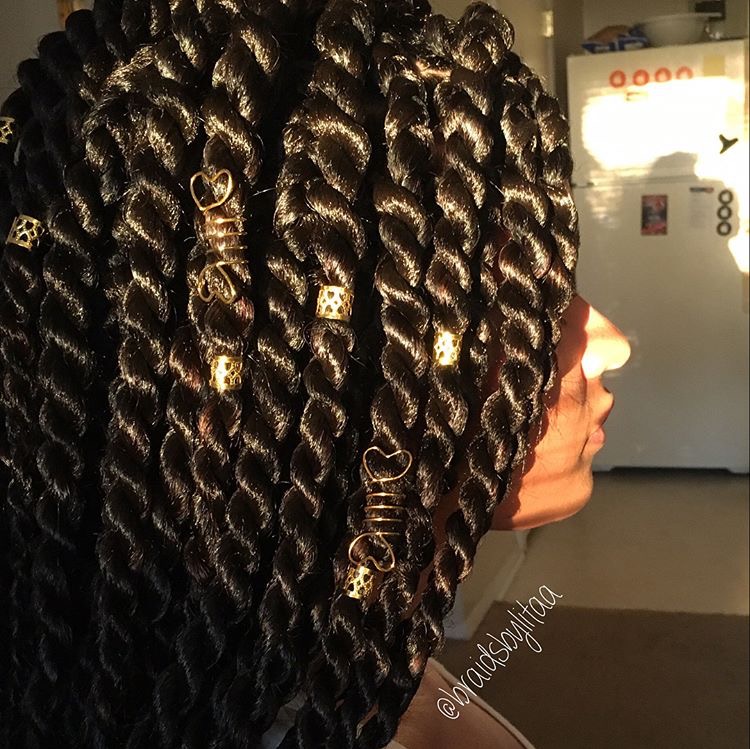 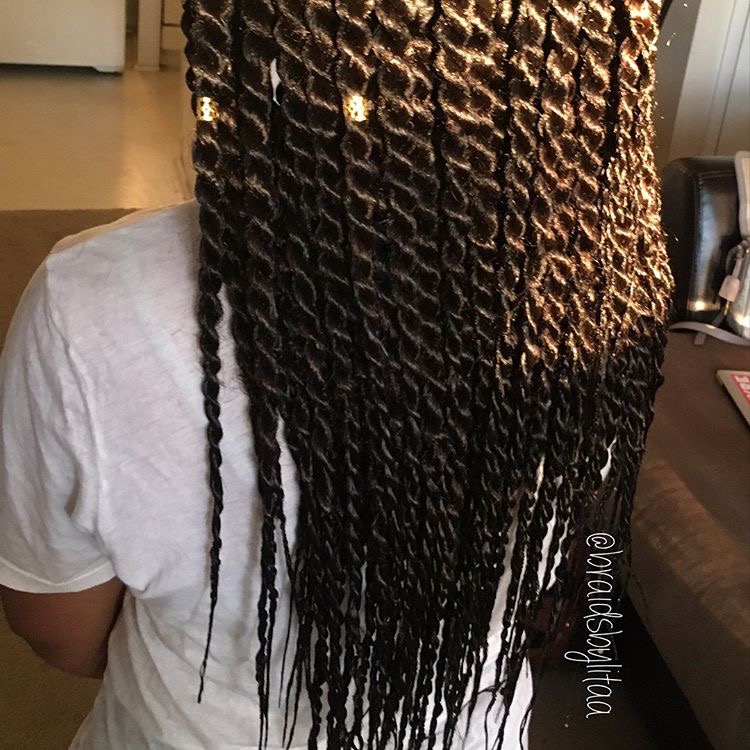 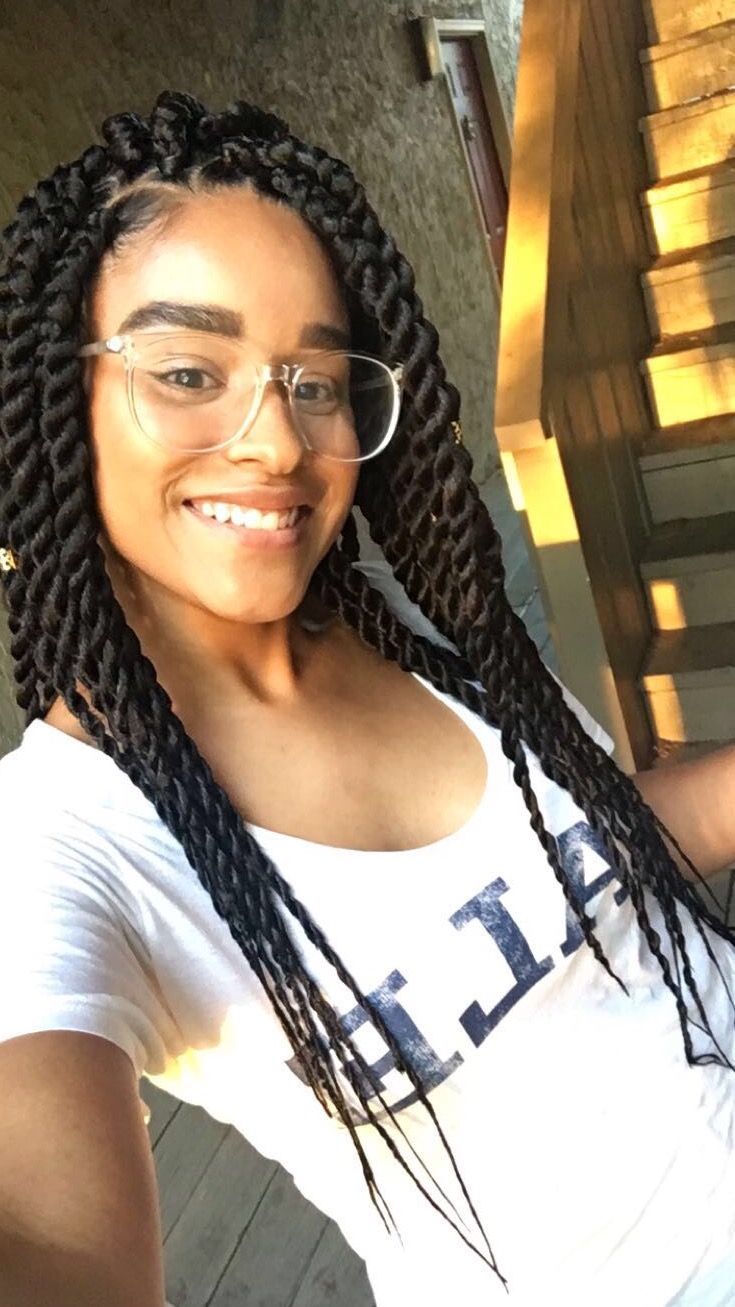 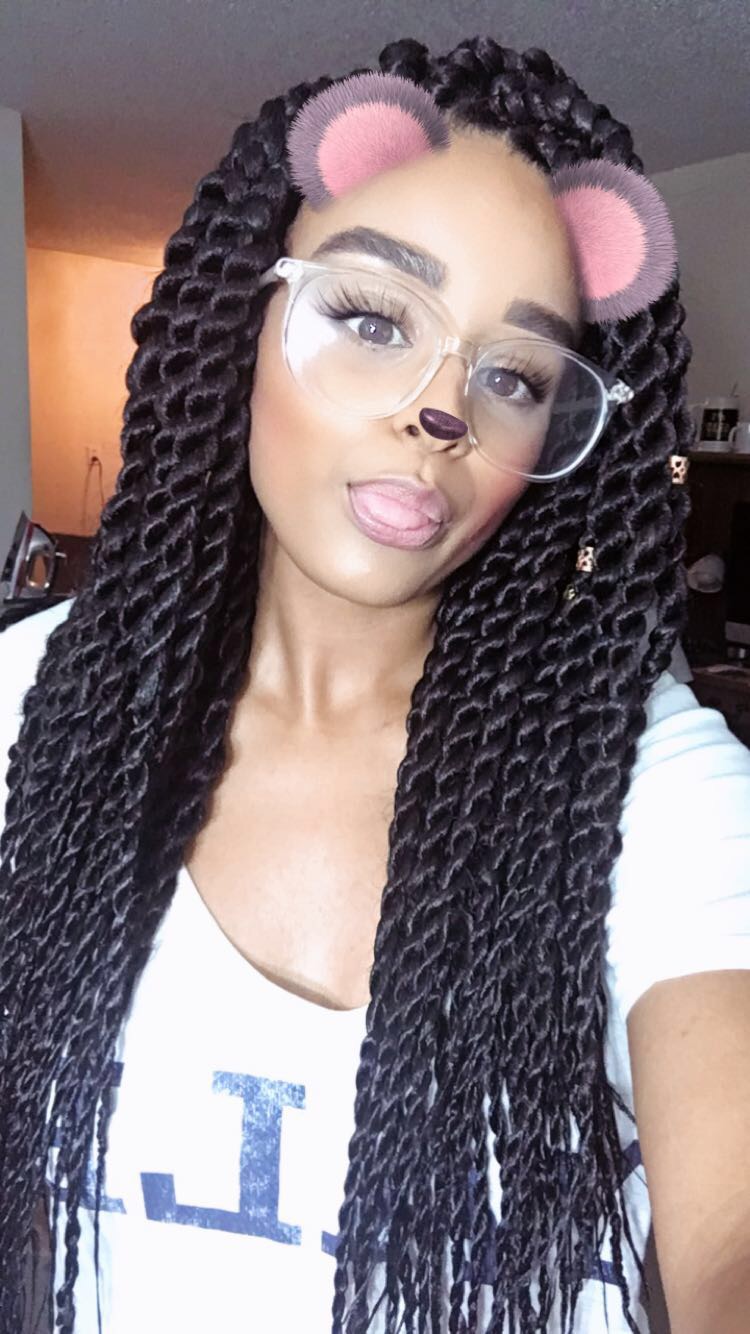 I felt so happy after seeing myself, cause it's exactly how I wanted to look, and I didn't feel out of place or awkward. I felt like I had every right to look this way. It also made me feel so good to hear everyone say they loved them, even one of my super Dominican friends, who I thought would be that one person to make an ignorant comment. Ah, how the world works. They were slightly heavy for like two seconds, then again at the end of the night (after skating for a few hours). Sleeping was also a task, but I managed to get a good night's rest. All in all, I'd definitely say my first protective style was a success!

If you're in the Huntsville, Alabama area, follow @braidsbylitaa !

Do I Smell A Discount?